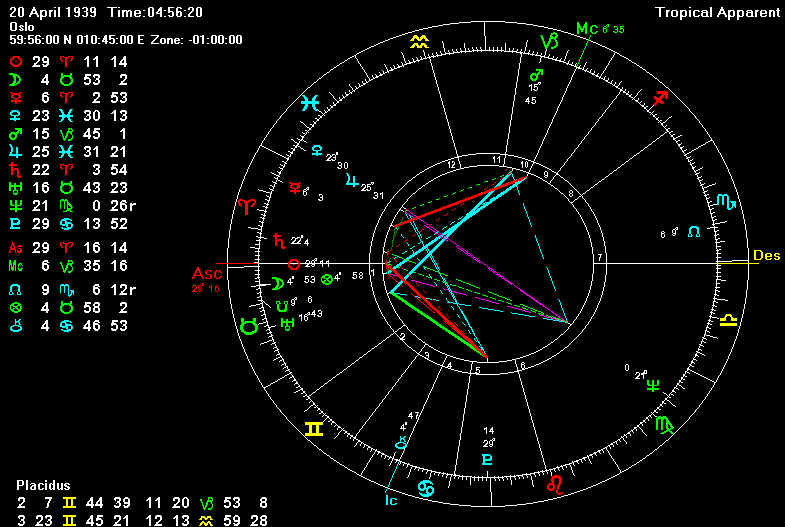 The validity of this Solar Chart can be argued by the fact that transit Uranus at 6CP25 was exact conjunct this MC at the time that Prime Minister Syse and his coalition government ("The Three-leaf Clover") resigned on Oct. 11. 1990, at time 11.00 LMT, Oslo.

Then when Brundtland tried to enter Norway into the EU in 1994 she suffered her largest and most unexpected defeat when her Solar Age Point at 26 Taurus connected to the current Lunar eclipse at 25TA42.

Gro Harlem Brundtland, a qualified medical doctor, never sat any full period as Norwegian Prime Minister, and did not complete har last period as Prime Minister either, which can be judged from her natal Sun in 30 Aries. She left the seat to Thorbjorn Jagland on Nov.25. 1996. Her Solar Age Point was 14TA41. However, this move had been decided and under her stage direction from the time of the conjunction to her radix Uranus at 16TA43.

While she seemed to resign from politics to rest and write a book, I immediately predicted that she would rise to a position of new prominence when the Age Point reached her exalted radix Moon at 4TA54 in June 1998. At the time she entered into the position as General Secretary for the World Health Organisation, WHO.