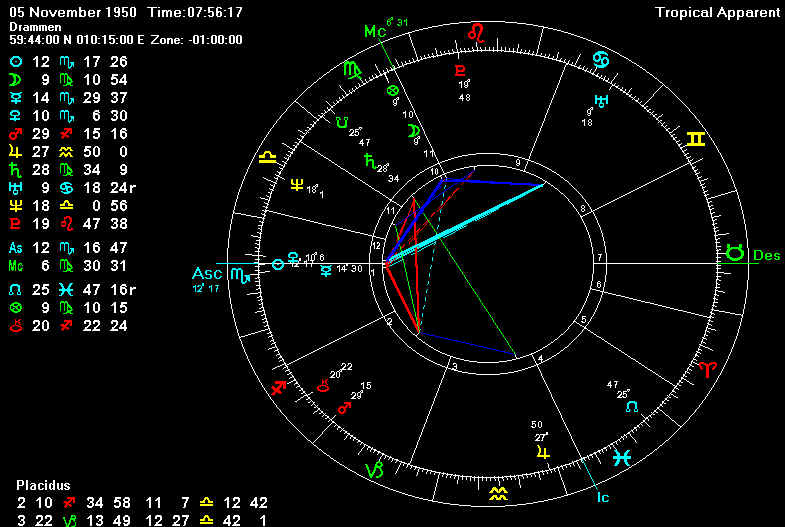 Jagland commenced his office as Norwegian Prime Minister a few weeks before he reached the age of 56 years. His Solar Age Point had reached 6 degrees Sagittarius and square the radix midheaven of the Solar Chart, through signs of long ascension. However, this same chart has the Moon culiminating in the complex sign of Virgo and applying by sextile through signs of long ascension (converting to a square) to Venus and the Sun, who are in the fall of the Moon. The sextile through signs of long ascension means that even from a good start, there may be misfortune, an overshooting and missing of targets. With a combination of the signs of Virgo and Scorpio, matters often get complicated. With the Moon in the South, Jagland was haunted by the press - who continued to put pressure on him. With the General Election of 1997 he had put an ultimatum that his party won 36,9% of the votes to continue in office. He missed and fell short of his target, and passed on the office keys to a coalition government formed by Kjell Magne Bondevik, Christian Democrates.

As Jagland entered office in Oct. 96', his Age Point applied to transit Pluto, not to be completed before the latter half of Jan 97 at 5 degree Sagittarius. In one sence, the upbuild of this aspect had lifted him toward the prime ministers seat as early as October, but the pressure was still on the build for the following months and it was easy to predict the turbulance and disruption that surrounded his government. It began with the newly appointed Minister of Planning Terje Rød Larsen being forced to leave due to questions aksed regarding a personal tax issue. The Minister of Justice, Anne Holt (an author of criminal novels, and thought to be a controversial choise) was harrassed by the press and was excused from her ministry due to health reasons. 1997 being an election year, Jaglands Age Point was making a semi-square to radix Neptune in late March. Accordingly, the Labour Party was falling drastically on the polls, Jagland was disarmed and not scoring the points he needed. One of Jagland's famous last words when leaving office was; "I will be back". With his Age Point entering into Scorpio and radix Mars being void of course, it was a simple case to state that he would not. On Feb. 9 200 Jagland announced he was passing on the Labour Party prime minister candidature to Jens Stoltenberg.